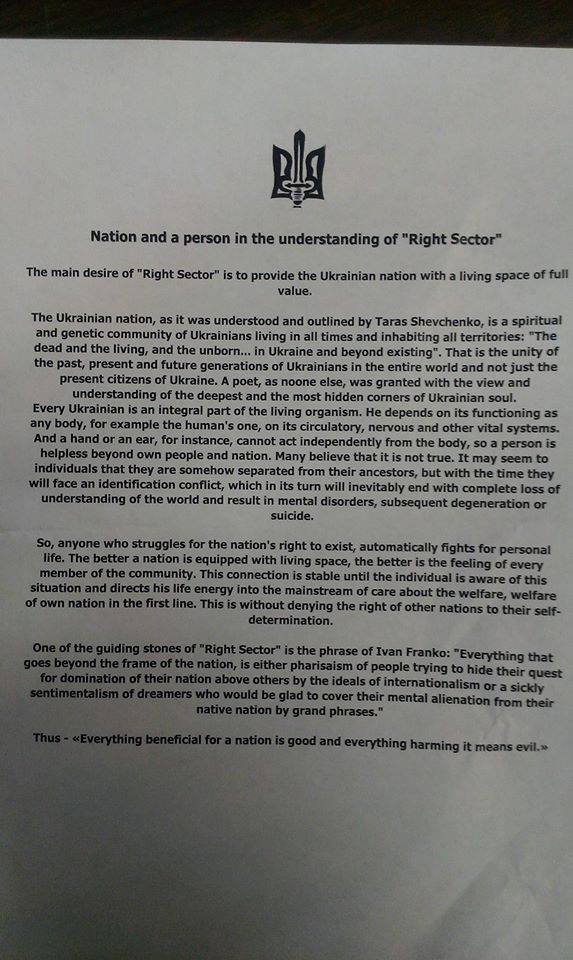 April 12 saw a heated confrontation between Fascists and Anti-fascists when about forty Maidan supporters attempted to break into an Anti-fascist sponsored teach-in at United Electric Hall on S. Ashland.

The forty Maidan supporters included demonstrators flying the flags of the Ukrainian Insurgent Army, and at least one “Right Sector” supporter complete with fatigues and regalia. Activists knew from previous encounters with the right-wing in Ukrainian village that the Maidan supporters in Chicago organize their rallies through networks maintained by ex-military contacts; this begins to explain the violent tactics employed by the Fascist mob.

As in previous Anti-fascist events related to the crisis in Ukraine, the Svoboda sympathizers attempted to worm their way into the event to take down the faces of the participants to identify “Reds” and “Jews” on their Anti-Anti-fascist sites, it is when these Fascists were removed that the mob attempted to storm the Hall. Acting as the event’s security wing, APL members and members of Freedom Road Socialist Organization kept the mob from reaching the participants by actively holding back the mob as it attempted to force its way in through the double-doors of the Union Hall.

It was during this struggle that an APL member noticed that one of the Maidan supporters had slipped Right-Sector propaganda under the door, the flier calls for Ukrainian living space, defines the nation as a genetic concept and closes with a quote by Mussolini.

After the attempted break-in by the mob, Chicago police arrived on the initiative of UE’s key-holders who felt their Hall was in danger of being ransacked by the ultra-nationalists. The mob argued briefly with the police, event attempting to press charges against Anti-fascists, which even the police informed them was ill-advised, the mob slinked away after this last whimper. Inside the mood was victorious, all the efforts of the ultra-nationalists’ forces had come to nothing, the teach-in was held successfully and Anti-fascist forces were consolidated to continue this fight until all people’s can live without fear and Fascism is reduced to a distant memory.

Like Loading...
‹ Iris Mary Jessie Cremer, 1943-2014
Party of Labour of Iran (Toufan): The life of the worker-activist Shahrokh Zamani is in Danger! ›