Home › History › Stalin at the Movies

Stalin at the Movies 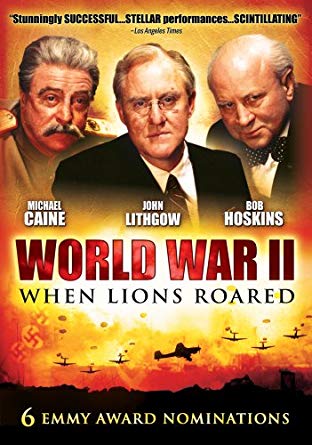 Michael Caine as Stalin, John Lithgow as FDR, and Bob Hoskins as Churchill in “World War II: When Lions Roared” (1994)

It is strange to say that, considering he was one of the most significant figures in world history, Joseph Stalin has rarely appeared on the silver screen.  Certainly, when compared to the number of films portraying individuals as widely diverse as John F. Kennedy and Adolf Hitler, the number of movies where Stalin appears is miniscule.

There were a number of films made in the former Soviet Union, both during his lifetime and afterwards that featured the Soviet leader as a character.  But these films, such as The Vow, Unforgettable 1919, and the well-received documentary I was Stalin’s Bodyguard are almost impossible to view outside of Russia; and, with the exception of the latter, may not even exist on tape or DVD.  That being the case, I’ll limit my observations to those productions an American or Canadian viewer would be likely to see or can easily find.

The most widely distributed film about Stalin would be the eponymously titled HBO docudrama, Stalin.  My own opinion towards the film can perhaps be guessed by the slogan the producers, used to publicize the film here in the United States: “For four decades the Russians had a word for death…Stalin!”

I feel the film not only slanders Stalin, showing him as a thug and a brute, but is one of the most anti-communist films ever made. This should come as no surprise considering that Robert Conquest, former British Intelligence agent and extreme reactionary, was cited as a major consultant in the film’s credits. The film bases itself on the crudest anti-communist stereotypes that are not only offensive, but even rejected by contemporary bourgeois scholars such as Sheila Fitzpatrick and J. Arch Getty.

Interestingly enough, the film totally ignores the period of WWII, jumping from 1941 to 1946.  I think there is a very sound reason for this. To wit, the film’s makers wanted to avoid anything that would show Stalin in a positive light. After all, even conservative historians praise Stalin’s heroism and leadership in the anti-fascist war.

Considering the film, purely as a film: I think most of the principles were totally miscast. Robert Duvall looks so little like Stalin that to affect even a slight resemblance, tons of make-up had to be applied to him. The end result is that Duvall’s Stalin goes through 40 years of Russian history with only one expression on his face — a constipated grimace. The actor playing Beria sports a full head of hair, and Maximilian Schell is way too tall and thin to play Lenin. 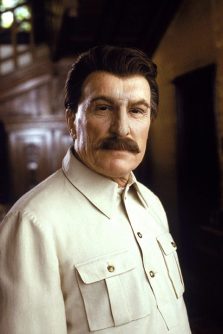 These may seem like quibbles, but then again, this is a film that purports to show historical truth. More appropriate actors could have been found. For example, Edward James Olmos for the role of Stalin, Patrick Stewart as Lenin, Bob Hoskins or Ed Asner as Beria, etc., etc. The film is visually beautiful, and nicely scored. But these attractions pale before the distortions of historical truth.

2017’s The Death of Stalin is, as the titled implies, not actually based on the life of the Soviet leader; rather, its focus is on the events following his demise.  Based on a French graphic novel, the film is a wildly uneven farce whose sole purpose appears to be to depict various Soviet historical figures as malevolent buffoons.  There seems to have been no attempt at verisimilitude in the casting; with the casting of thin, lanky American actor Steve Buscemi as Nikita Khrushchev serving as a fitting comment on the rest.  The film was praised in the British press, but drew fire from some historians for gross historical inaccuracies, such as creating a fictional massacre of mourners at Stalin’s funeral.  The film was banned in Russia and several former-Soviet republics, and never entered into general release in the US. 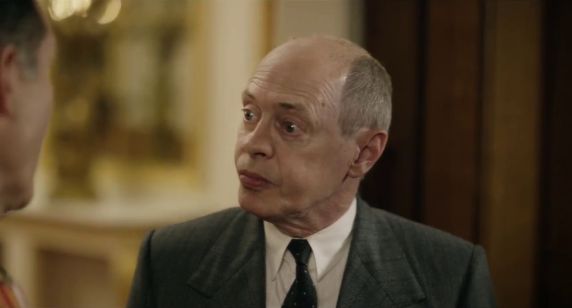 Most of the other films portraying Stalin, while not as execrable as The Death of Stalin or the HBO TV production, are weak to one extent or another. In The Winds of War, Stalin has but a cameo role, and his purpose is mainly to silence a Russian critic of the hero.  The Inner Circle and Europa, Europa both use Stalin as a symbol.  In the first film Stalin represents the protagonist’s conflicted relationship with his wife; and in the second Stalin represents the hero’s fears and fantasies about wartime Europe.  There was an American TV movie, Meeting at Potsdam where Jose Ferrer did a fairly good job of playing Stalin. But this film is presently unavailable to home viewers.

For my money, the best cinematic portrayal of Comrade Stalin was by the British actor Michael Caine in the mini-series World War II: When Lions Roared. Widely available on video, this movie is unique in that it consists solely of the communiques and meetings between Stalin, Roosevelt and Churchill. The dialog is taken straight from their correspondence and the minutes of meetings. In other words, there is no fictional dialog or scenes — just the straight, accurate, historical truth!

Caine’s Stalin is superb. Comrade Stalin appears as a man of high intelligence. Complex and shrewd, yet also very human. But what comes through most of all, is Stalin as totally dedicated to the Soviet Union and to smashing the fascist hordes. This is the film for anyone seeking a cinematic interpretation of Stalin. 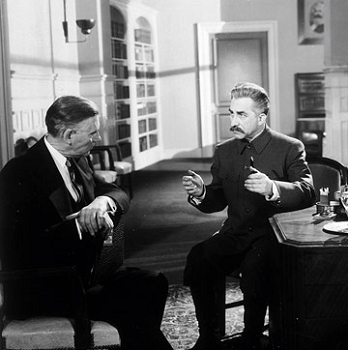 Walter Houston as US Ambassador Joseph E. Davies and Manart Kippen as Stalin in “Mission to Moscow” (1943).

Finally, there is, of course, the film version of Ambassador Joseph E. Davies‘ memoir, Mission to Moscow.  This film succeeds in capturing Soviet Russia, as seen through the American ambassador’s eyes, but it’s hard to find and is a bit dated. Made in the 1940s, the wartime propaganda, though understandable, is rather unsubtle and simplistic. Not a bad movie, by any means. But not the best.

So, to my lights, World War II: When Lions Roared, stands as the best film treatment, to date, of Stalin and his era.