Free Syrian Army: No opposition talks if intervention is not discussed 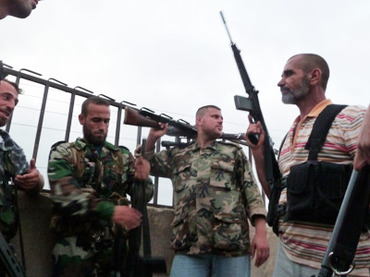 Members of the radical Syrian opposition have boycotted a meeting in Cairo, where some 250 delegates are discussing an internationally backed transition plan. The armed rebels branded it a conspiracy and said the agenda lacked an aggressive stance.

The rebel Free Syrian Army and “independent” activists lashed out at the organizers of the two-day conference for “rejecting the idea of a foreign military intervention to save the people… and ignoring the question of buffer zones protected by the international community, humanitarian corridors, an air embargo and the arming of rebel fighters.”­

The boycotters said they refused “all kind of dialogue and negotiation with the killer gangs… and we will not allow anyone to impose on Syria and its people the Russian and Iranian agendas.”

The meeting in the Egyptian capital brought together mostly members of the exiled wing of the Syrian opposition, the Syrian National Council (SNC), as well as representatives from France, Tunisia and Turkey.

At the opening of the two-day conference in Cairo, the Arab League chief has urged Syrian opposition figures not to waste an opportunity to unite.

“The sacrifices of the Syrian people are bigger than us and more valuable than any narrow differences or factional disputes,” Nabil Elaraby said.

The Cairo event is to be closely followed by a visit of the Syrian opposition delegation to Moscow on Wednesday and Thursday, the Russian Foreign Ministry said. Next week the head of the SNC Abdulbaset Sieda may arrive in the Russian capital to meet Foreign Minister Sergey Lavrov.

The Syrian opposition is mulling a proposition for a transition in the country, which was voiced by international negotiators in Geneva on Saturday. The plan is to form a transition government, which would include representatives from both the current government in Damascus and opposition members.

The initiative is universally backed in contrast to months of disagreement over how to deal with the conflict. This is even despite lack of coherence over whether Syrian President Bashar al-Assad or members of his inner circle have a place in the would-be transition government.

Russian Foreign Minister Sergey Lavrov said an initial version of the document read “those whose continued presence and participation would undermine the credibility of the transition and jeopardise stability and reconciliation,” but the phrase was dropped out of the final communiqué on Russia’s insistence and replaced by a reference to “mutual consent” of the parties involved.

“It didn’t fit in into the principle of inclusiveness and the UN Charter article on non-interference into domestic issues of sovereign states,” he said, adding that the composition of the would-be government has to be decided by the Syrians alone.

But US Secretary of State Hillary Clinton believes even in the new version the document implies that Assad has to go.

There is “no way anyone in the opposition would ever consent to Assad or his inside regime cronies with blood on their hands being on any transitional governing body,” she commented.

French and British officials also said the Syrian President has no place in the future of the country and that the Geneva document implied that.

In Syria there is skepticism about the international plan. The SNC called it “ambiguous” while the Syrian ruling party’s newspaper, Al-Baath, considered the whole Geneva meeting “a failure”.

George Jabour, former advisor to the Syrian government, argues that this one newspaper assessment is not indicative.

“Other newspapers did not say so, and the Syrian government is rather positive towards the result. I have watched Syrian official media outlets and they are rather positive,” he told RT.

The Geneva efforts were just talk and show for the international community, because the rebels and their backers only want regime change, Asia Times correspondent Pepe Escobar told RT.

“They have the Kofi Annan plan, they have the Geneva discussions and it is absolutely ridiculous because they did not even bother to invite Iran and Saudi Arabia, which are both major players in the Syrian situation,” he said. “Just like the original Kofi Annan plan was bound to fail from the beginning, what has been discussed in Geneva is also bound to fail.”

The 16-month long violence in Syria has claimed the lives of thousands of civilians and security personnel. The exact death toll is difficult to establish, but the UN estimates that more than 10,000 people perished in the hostilities.