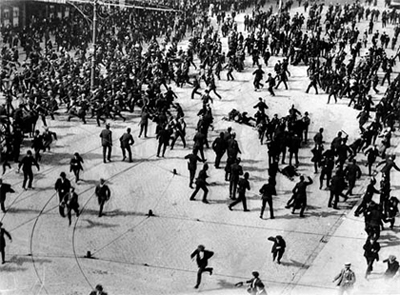 Image from the Easter Rising, a 1916 uprising against the British imperialist government in Ireland.

St. Patrick’s Day is typically portrayed as a day for drinking, festivities and revelry. However, we in the American Party of Labor believe that revolutionaries should set aside some time every year to remember the tragedy of discrimination the Irish people have faced here in the United States, and to celebrate the memories of Irish-American socialists and progressives and the international friendship between the Irish Marxists and those in the United States.

Discrimination & Racism Against the Irish

Ireland was a long-standing colony of the British Empire.  British oppression of the Irish is now notorious, culminating in the “Great Hunger,” also called the Irish Potato Famine or the Great Famine. It lasted from 1845 – 1852 and killed approximately 1.5 million Irish from starvation and disease. Another 1-2 million Irish were displaced, or overall 20-25% of the population of Ireland were killed or driven out by the famine. The famine was entirely artificial, created by the combination of a potato blight which killed the Irish people’s main food supply, and the conscious decision by the English Treasury to ship all food to England and not to import food to Ireland, knowing that hundreds of thousands of Irish were starving. According to the laws of the United States and international law,  the Irish Famine constituted genocide against the Irish nation by the British Empire.

As a result of the famine and the Irish status as  one of the most discriminated against groups in Europe, Irish emigrants scattered around the globe. Many Irish people sought a better life by immigrating to the United States. Unfortunately, discrimination was found in the United States as well, especially if you were an Irish Catholic. In the 1850s, the anti-Irish racism of the U.S. was at its peak, with New York City schools portraying the Catholics in general, and especially the Irish, as villainous ape-like barbarians. Reactionaries in the U.S. sought to remove all influence they had in politics, and signs existed, copied from similar signs in Europe, bearing the infamous “No Irish Need Apply” slogan.

It should come as no surprise that as a result of this discrimination many Irish proletarians ended up in work gangs and were hired by contractors to build railroads, streets, canals and other projects throughout the United States. From the 1870s to 1900, the Irish were ruthlessly stereotyped in magazines like Puck, and the stereotype of the “violent drunk Irishman” even persists in the United States today.

Many Americans of Irish decent have stood up to fight discrimination and oppression of the working class throughout practically the entire history of the Irish in the United States. We will highlight just a few in this article.

Shays fought in the American Revolution, and was the son of an Irish immigrant who was forced into indentured servitude. Before the revolution broke out, Shays was a farmer, and when he heard of the revolution taking place, he joined thinking the end result would leave him and his fellow workers free from oppression. Shays fought in the battles of Lexington, Bunker Hill, and Saratoga, rising to the rank of Captain in the 5th Massachusetts Regiment. During the war, Shays was wounded and was sent home unpaid for his service.

When Shays returned home, he discovered that he was still being called upon to pay his debts, along with many of his fellow workers, veterans and farmers. Shays and his friends discovered that local businessmen were trying to bleed the workers dry of their entire livelihood to pay their own debts owed to war investors in Europe. The Shayists attempted to petition Boston about resolving the situation, but this was of course futile.

Shays organized a rebellion, leading hundreds of rebels opposed to the new system which allowed the wealthy to exploit the poor while the government protected the rich. In 1786 there were a few skirmishes between Shays’ rebels and the state, but eventually Shays’ men were defeated at Petersham, MA. Shays, although charged with treason, was granted amnesty in 1788 by John Hancock, and throughout the rest of his life continued to assert that he fought in the revolution and the rebellion for revolutionary principles.

Shays died in poverty in 1825. He will remain an inspiration to those who not only fight oppression, but will not stand down and let the revolutionary ideals they fought for be betrayed.

Mother Jones, as she came to be called, was born in Cork, Ireland. Jones later moved to Canada for a brief time, followed by living in the United States in the cities of Monroe, MI, Chicago, IL, and Memphis, TN.

She was a union organizer affiliated with the National Union of Iron Moulders, the International Moulders and Foundry Worker’s Union of North America, and the Knights of Labor. With the United Mine Workers, she encouraged them to stay on strike even when management threatened workers with strike-breakers and militias. Her slogan was, “Pray for the dead and fight like hell for the living.”

In 1903, Mother Jones organized a march to the home of President Roosevelt, an alleged progressive, demanding child labor be brought to the forefront of the public agenda. The marchers carried banners saying “We want to go to school and not the mines!”

Although many children suffered from work-related disabilities, the papers refused to raise public awareness about the issue, as the companies held stock in the papers. Jones remarked “Well, I’ve got stock in these little children and I’ll arrange a little publicity.”

Even though Jones was denied her later request to meet the President in person to discuss the issue, child labor did eventually become publicly addressed thanks to the efforts of Mother Jones and people like her. In 1905, she co-founded the Industrial Workers of the World along with Eugene V. Debs, Bill Haywood and others in Chicago, Illinois.

Although as passionate about women’s rights as worker’s rights, Mother Jones seemed to understand the futility of the 19th Amendment, commenting “You don’t need the vote to raise hell!” The American Party of Labor agrees with Mother Jones’ statement. Woody Guthrie wrote a song about Mother Jones called Union Maid, encouraging women to fight for rights for both women and workers, and it has been suggested the “she” in the song “She’ll be coming round the Mountain” is a reference to Jones.

Mary Harris Jones died in 1930, but is remembered even today by all those who fight for worker’s rights here in the United States.

James Connolly, best known to the Irish as an Irish Republican Socialist revolutionary who fought in the Easter Rising, the failed but valiant 1916 uprising against the British imperialist government in Ireland, was a leader in the Irish Citizen Army and the Irish Socialist Republican Party.

What many historians overlook or ignore is Connolly’s Marxism, as the bourgeois nationalists in Ireland prefer to think of him as merely an advocate of Irish independence. The truth is, while traveling the world prior to the Easter Rising, Connolly lived in the United States, becoming involved in Socialist politics in America.

Another important instance of Irish-American friendship and solidarity can be seen in the Spanish Civil War, among the International Brigades.

Made up of former I.R.A. members and other left-wing supporters of the Spanish Republic, particularly Communist Party of Ireland Members, the Connolly Column fought side-by-side with the American Abraham Lincoln Brigade at the battle of Jarama Valley, where both suffered heavy losses against Franco’s Fascists. The column preferred to join the American rather than the British battalion for obvious reasons.

We recommend all socialists take some time this St. Patrick’s Day to reflect on the struggles Irish people have had to face in this country, but also celebrate the long-standing friendship between those who fight for working class liberation in the United States and in Ireland, and our history of working together.