Acta protests break out as EU states sign up to treaty 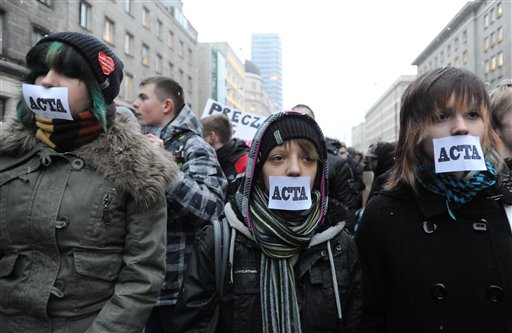 MEPs of 21 EU states, including the UK, have signed off on the controversial Anti-Counterfeiting Trade Agreement

The UK and 21 other European Union member states on Thursday signed an international copyright agreement treaty called Acta (Anti-Counterfeiting Trade Agreement), sparking more demonstrations by internet users who have protested for days both virtually and physically over fear it will lead to online censorship.

Following the signing, protesters rallied in the Polish cities of Poznan and Lublin to express their anger over the treaty. Lawmakers for the left-wing Palikot’s Movement wore masks in parliament to show their dissatisfaction, while the largest opposition party the right-wing Law and Justice party called for a referendum on the matter.

The signing has yet to be ratified by the European Union parliament, and is scheduled to be debated in June. MEPs are already coming under intense pressure from activists on both sides over the forthcoming vote.

Poland’s ambassador to Japan, Jadwiga Rodowicz-Czechowska, signed the agreement in Tokyo. Speaking on Polish television, she said that Poland was one of several EU countries to sign Acta on Thursday, including Finland, France, Ireland, Italy, Portugal, Romania and Greece.

Several other industrialised countries – including the US, Canada and South Korea – signed the agreement last year.

Poland’s support for Acta has sparked attacks on Polish government websites by the hacking collective Anonymous that left several of them unreachable off and on for days. Street protests of hundreds, and in some cases thousands of people, have broken out across Poland for the past three days.

Germany, the Netherlands, Estonia, Cyprus and Slovakia did not sign on Thursday, and one French MEP quit the scrutinising process for Acta complaining that the European Parliament was participating in a “charade”.

Acta has been significantly changed from earlier versions, removing an earlier demand that internet users found of repeatedly infringing copyright should be cut off from the web – a suggestion the EU rejected.

Although the EU maintains Acta will not require any legislative changes in member countries – and instead will bring other countries up to European standards – controversy has been deepening in Poland over the proposals.

While many other industrialised countries have signed it, popular outrage appears to be greater in Poland than anywhere else.

Acta is a far-reaching agreement that aims to harmonise international standards on protecting the rights of those who produce music, movies, pharmaceuticals, fashion, and a range of other products that often fall victim to intellectual property theft.

Acta also takes aim at the online piracy of movies and music; those opposed to it fear that it will also lead authorities to block content on the internet.

A prominent Polish rock act, Zbigniew Holdys, has come out in support of Acta, accusing the internet activists – mostly young people – of profiting from pirated material online and trying to hold onto that practice.

Acta shares some similarities with the hotly debated Stop Online Piracy Act (Sopa) in the US, which was shelved by lawmakers last week after Wikipedia and Google blacked out or partially obscured their websites for a day in protest.

In reaction to the widespread opposition, Polish leaders have been struggling to allay fears over it.

Poland’s Foreign Minister Radek Sikorski defended his government’s position in a TV interview on Wednesday evening, arguing that Acta is not as threatening as young people fear.

But he said the internet should not be allowed to become a space of “legal anarchy”.

“We believe that theft on a massive scale of intellectual property is not a good thing,” Sikorski said.

In the Czech Republic, a local group aligning itself with Anonymous attacked the website of a group that supports Acta. The group collects money for music production and distributes it to artists.