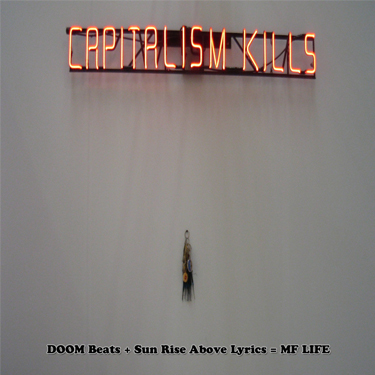 This mix-tape by Sun Rise Above with beats by MF DOOM is overall a very good album. It is short, precise, and of great quality, flowing excellently from one song to the next. Great songs such as “Deficit” use highly articulate lyrics to maximize the impact on the listener, driving their message home.

“Check your man’s flows exposing Uncle Sam’s scams right
Kind of like Contra-Iran, the Bushes pushing grams
They took this land away by force in a genocide
So when I ride, I knock ’em off their high horse like Custer
What the fuck? Murderizing, bomb dropping
And I’m the one who got the cops knocking on my door?
An enemy of state, reading The State and Revolution
By Vladimir Ilyich, got no time for the silly shit
Yea, grabbing the cartridges and launching this attack
Shut down the ports and raise the consciousness
General strike, take a break like an interlude
Won’t mine a mineral or butter a fucking dinner roll
Then we’ll rule and institute “a change you can believe in”
Happiness in abundance when capitalists stop thieving
Leaving this behind as a message and a testament
Want to stop the crisis? Assassinate the precedent

They say they’re spreading freedom, what a fucking mockery
In America there’s a deficit of democracy”

Capturing the spirit of the imperialist foreign policy of United States, Sun Rise Above proves his understanding of Marxist-Leninist ideology and his capabilities as an artist. Most striking is his use of lyrical feats and plays on words, such as using “precedent” in place of “president,” and so on.

“Rent” is another excellent song on the mix-tape personifying the tedious and angering reality encountered by the millions of Americans trying to make it paycheck to paycheck. Sun Rise Above exposes an essential failure of the capitalist system. Feeling as if society simply cannot be changed and the only option that remains is to yield to it, so many Americans become depressed and disillusioned with life because they resign themselves to living under capitalism.

“Yea
It’s that time of the month

I’m flat broke, word to my landlord
Can’t afford to pay rent, stab him with a dam sword
Been listening to too much of the Wu-Tang Clan lord
At the bar holding up the wall like a band board
I am bored, and drinking never changes shit
Go to sleep drunk but then you wake up to the same old shit
Still chug a brew or six ’cause I’m futureless
My whole generation left hanging on a crucifix
Not new to this, a decade of spitting rhymes
You wanna get paid? Okay, hey get in line
Soup kitchen, or you can troop to the new mission
Who’s dissing who doesn’t matter if you listen”

“Busking” is yet another excellent song on the CD:

“Ain’t even got two pennies to rub together
My two cents, life’s a beach if you love the weather
You can take it for what it’s worth
An out of work beggar on the train in a hooded shirt
He came by shaking a can
Asked me for a nickle but I gave him a grand
Well, that was my plan, but I’m worse off than he’s been
Time running out, candle burning from each end
Light’s disappearing, darkness is impending
So I offered change, but it’s not what he intended
They just raised the fare to 2.25
Sometimes I swear they don’t even care if we’re alive
Left broke and starving, and can’t afford food
So pardon me if I’m in a poor mood
I’ll say I can’t complain but still do
‘Cause shit builds up like mildew until it kills you

Exact change, the facts bring progress
All this adds up to a mathematic match up”

Finally, “Austerity” focuses on the literal meaning of austerity from the view of the working poor. In capitalism, whenever governments decide to cut back on spending, it is never the armed forces or capitalist wallets that take the hit, but rather the social services. When the capitalists make an economic mess, they do not suffer the consequences; it is the working class who lose their jobs and their homes.

“Yea, dedicated to all the cutbacks

Yea, kind of reminds me of last night
Walking around blind like I couldn’t find a flashlight
Rich folks, poor folks, more folks
Forget a door man, in my housing plan the door’s broke
Anyway, fame’s meaningless
You can ask all the dead authors on my reading list
Gotta stay awake or you’ll really miss
If you sleep through it, it’ll be a bed bug feeding fest
Don’t make me go ape shit and start beating chest
With more rhetoric than a Glenn Beck freedom fest
He’s a pest, best blow him off stage
Then jet like a runaway slave running away

They declare: “prepare for austerity,” fuck that
Knife to the throat, show politicians some cut backs
Blood in the Streets it’s deep, up to my knees
I’m swimming in it, sweat dripping in my fatigues
These wet footprints as I scream like Sam Kinison
When is the dead innocent bled from red menacing
Maybe, inoculate the population medicine
Better let us in ‘fore they begin the scarlet lettering
A veteran, lately, head splitting Excederin
Still, better than ever in whatever in I’m meddling
Baby, please plant a kiss on the cheek
As I proceed to take a leak on the mic, music is obsolete”

The beats on the mix-tape by MF DOOM are worthy tributes to his usual melodic and abstract style. His beats are minimalist but unique, and much like Sun Rise Above himself, DOOM is extremely underrated. The soundtrack greatly enhances the potency of the lyrics, the beats usually building up to a crescendo during the song as Sun Rise Above contributes his raw and aggressive style.

While in Sun Rise Above’s previous album “Every Day I Wake Up On The Wrong Side Of Capitalism,” Rosa Luxemburg got a brief mention, on this mix-tape S.R.A. name-drops State and Revolution by V.I. Lenin. “MF Life” shows Sun Rise Above evolving. S.R.A.’s “MF Life” mix-tape adds up to be a superb continuation by a very insightful lyricist, showing his growth as a musician and his developing capabilities as a revolutionary voice in a genre defined by opulent celebration of the corrupting influence of capitalist celebrity-hood.